Ben started his career in marketing and is an accomplished jazz pianist who has played with the Midland and National Youth Jazz Orchestra and at Ronnie Scotts and the Hundred Club.

In 1998 he set up a music social enterprise known as Choice Music, which was developed to improve access to live music in the UK, which won an award for its innovation in 2000.  In 2002, he became Chief Executive at Jericho Community Business, an intermediate labour market (ILM) organisation in Birmingham that still provides work placements to long-term unemployed.  Ben brought in and operated New Deal, LSC, MATRIX, Co-Financing, and ESF while at Jericho, which also became one of recommended places to visit for the government Social Enterprise Visit Programme.

Ben has now been working in Africa since 2007, initially in Nigeria with Ashoka Fellow, Emmanuel Nehemiah and since 2009 in Uganda, where he has been responsible for developing the Butterfly Project, a project to train social entrepreneurs from the most disadvantaged children living in remote rural and slum areas.

He used the money from the sale of his house to found the project in 2009, intending it to be just a pilot for one year, but the results were remarkable, as the children being trained embraced the idea of being changemakers much more than expected.  Since then he has recruited three other groups, from both rural and slum districts and has recorded similar positive results. 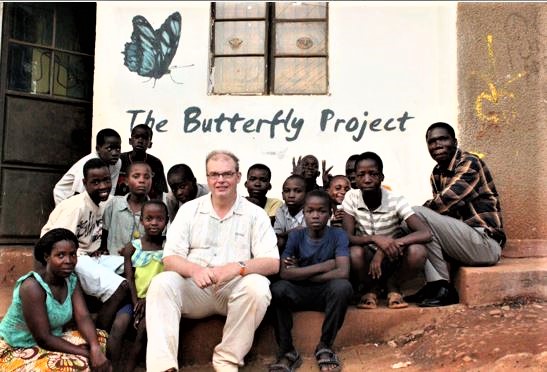 He is now most at home living in Uganda and spends most of the year working on the gradual evolution of the Butterfly Project.

In 2017, Ben hopes to set up a school to train teenage social entrepreneurs in Northern Uganda, implementing the core Ugandan curriculum with Saturday sessions concentrating on developing vision, implementing projects and otherwise utilising the existing Butterfly Project curriculum in conjunction with school programmes.

The original Pioneer members are now established young activists and lead Ashoka’s Youth Venture Programme in Uganda; many have won awards for their work or received publicity.  Most have social projects that they are delivering, on which they can focus their passion for change.

Working through those children from rural areas and urban slums who have a selfless attitude and ideas for their community, an evolving and reliable mechanism for change in the villages is being developed. The Millennium Development goals, with poverty and human rights are at the top of the agenda. The young people are trained in a whole range of subjects – social enterprise and entrepreneurship, ethics, international citizenship, ICT, problem-solving and much more, while they attend the Chrysalis Centre.

Each member must undertake a project of their own, both in the local slum district and in their home village, so that they gain experience of leadership and practical problem-solving.

In December we sent 18 young people to Nairobi, to be part of the Ashoka Changemaker Youth Conference. This included three children from remote villages, who had never travelled outside their local area, but were already running their own local changemaker projects: