‘Social entrepreneur’ Christine studied as a biologist and spent the first part of her career in medical research before changing direction and moving to Birmingham, where she has helped to develop three socially beneficial projects in the inner city. One was the Jericho Community Project, which continues to offer paid work experience with training, to the long-term unemployed, through community businesses.

The latest to be established is the Doula Project which works with vulnerable new mothers, especially asylum seekers. 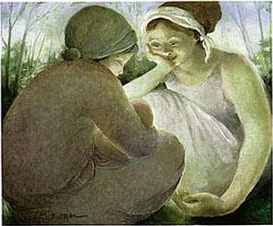 In today’s terms a doula is a mother’s helper who specialises in supporting a woman on her journey into motherhood. She provides not only practical, physical and emotional support but helps a woman discover what kind of birth and perhaps even what kind of parenting might work best for her.

The Birmingham project arose out of a clear need discovered during community work by parish nurses in Sparkbrook, amongst pregnant women, most of whom were seeking asylum, and termed ‘isolated’ or vulnerable. A small team of committed volunteers grew in response, offering emotional and practical support to these special mums, which has continued and is increasing in demand every year. Some of the volunteers are themselves asylum seekers.

Christine’s next step?  A healthy living centre in inner-city Birmingham

After spending time as a non-executive director of South Birmingham Primary Care Trust she saw the need  for a healthy living open door centre in inner-city Birmingham, which will provide drop-in community activities, especially those promoting healthy living and be a source of health information for the local community.

Christine is now dividing her time between the Doula community health project in Birmingham UK and fundraising for the Butterfly Project in Uganda, which was co-founded by her son Ben.

Christine recently finished writing “Three Generations Left? Human Activity and the Destruction of the Planet”, which outlines how so-called progress has combined with a host of other factors, including free trade, a market economy, population increase and the development of a super-rich minority owning most of the wealth of the planet, to bring about global warming and climate change which could lead to the loss of many species and mass human extinction before the end of this century. She also sets out a series of measures which could move us towards a new, balanced, green economy.

“Three generations Left” can be ordered direct from the publishers, using the following link: http://www.newgeneration-publishing.com/bookstore/reference/bookdetails/1778 or can be ordered from the Amazon website, print on demand, as follows: https://www.amazon.co.uk/Three-Generations-Left-Activity-Destruction/dp/1787190412/ref=sr_1_1?s=books&ie=UTF8&qid=1483704765&sr=1-1&keywords=Christine+Parkinson