Many readers will have satisfying memories of attending or speaking at meetings on monetary issues in the Commons and House of Lords, which were organised by Sabine McNeill, founder of the Forum for Stable Currencies. At one of these I sat with a sceptical young investment banker and saw him being won over by James Robertson’s presentation and – at least – agreeing with his recommendation of ensuring a ‘level playing field’ in banking. The Forum’s chairman, MP Austin Mitchell tabled ten Early Day Motions (EDMs), signed by almost 80 MPs. One example:

That this House believes that HM Treasury should alleviate the effects of the recession and prevent the continued escalation of debt by matching the amount of money created through quantitative easing by the Bank of England with interest free cash for financing works in the public interest, thus addressing the enormous imbalance between interest bearing credit and interest free cash in the overall money supply. 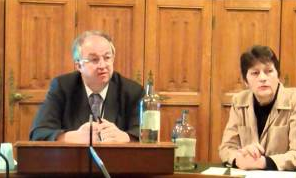 Sabine continues her ‘day work’ with 3D Metrics and works equally hard in a voluntary capacity. One of her main tasks is advocacy for parents who have had their children taken into state ‘care’. She writes that One Voice for the Kids has launched a protest picked up by 38 countries so far. The Education Select Committee is currently investigating ‘child protection’.

The protest comes as the number of children taken into ‘care’ from their parents by social workers is rising. England’s referral figures passed the 900-mark in February, compared with 803 the month before and 698 in the previous January. In March and May numbers continued to rise.

Secrecy surrounds hearings in family courts – legally enshrined by the Children Act 1989. An online petition to lift it had over 800 signatures and over 12,000 page views so far. 1,200 signatures collected by hand were handed to Welsh Assembly member Bethan Jenkins by the originator, Jane Davies in Carmarthenshire.

For many months Sabine has faced questioning and had a restraining order placed on her, to prevent the publication of evidence collected from parents and children. This month she was detained but got the German Embassy involved, securing her release. Undaunted she will travel to Cardiff to participate in the Independent Inquiry into Child Sexual Abuse, which will be chaired by  Prof. Alexis Jay OBE, assisted by a panel of three members: Prof. Sir Malcolm Evans KCMG OBE; Ivor Frank; and Drusilla Sharpling CBE. Each is an expert in his or her field and has experience in challenging institutions, and managing, analysing and evaluating complex evidence.